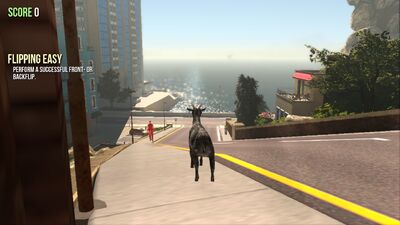 "The coastal jewel of northern GoatAsia,"

Many new features were released with this map, including running on walls, swimming, riding skateboards and bikes, and walking on two legs (called manualing).

Goat City Bay has many more buildings to explore than GoatVille, both residential and commercial. However here are still some wilderness areas to find, such as a primitive shrine and an uncharted island. There is also an amusement park, a spooky cemetery, a dance party, and more.

There are 40 quests in Goat City Bay, though some can be completed in GoatVille as well.

There are 30 trophies hidden in Goat City Bay. Collecting them all unlocks the I freaking love goats achievement.