"Grab stuff by licking then press Special to make bombs!"

Available at start. However, this is not so for the mobile version of the game. 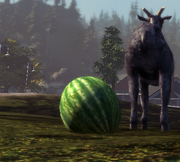