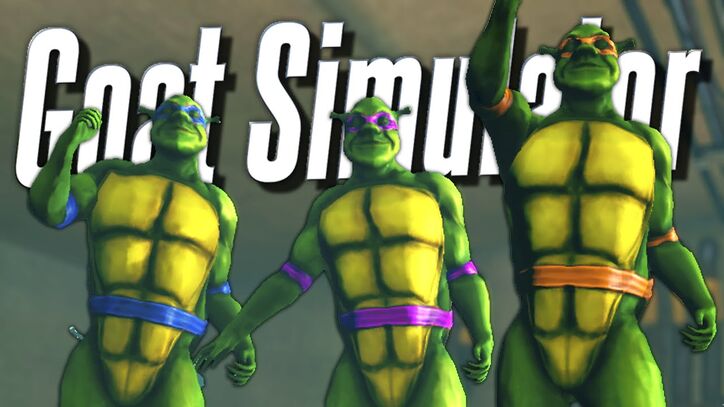 The Michael Bay Turdles are NPC's found in Goat City Bay and are antagonists in Goat Simulator.

The Michael Bay Turdles are found in the Sewer of Goat City Bay, and if approached properly, can be observed to dance in-sync to music. When provoked (walking towards them) they will wave their fists and begin to attack while screaming and saying things like "GOAT!!!", "COME HERE YOU!", "I'LL GET YOU FOR THIS!", "I HATE GOATS!". Attacking them unlocks the achievement Ling Ling into battle go. They also seem to be guarding a trophy.

In the PC and mobile versions of Goat Simulator, the Michael Bay Turdles appear as the Teenage Mutant Ninja Turtles (Donatello, Raphael, Michelangelo, and Leonardo), except, in order to make fun of the character's portrayal in the 2014 movie, their heads are that of Shrek.

On the console versions, their appearances are changed to people in green suits wearing colored bandanas. They have the same dialogue and behavior, just a less-monstrous appearance. This is likely done due to copyright issues.